I was trouble energy, as you humans may put it.

I had been passed over by a mother or two who thought I was a little too… troublesome. 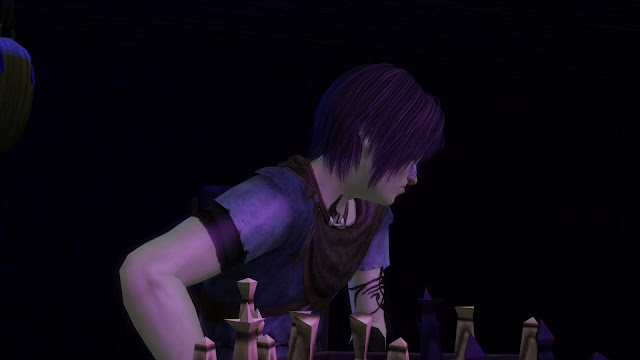 Perhaps they were hoping I would be absorbed by a spirit that was more stable, or, Torig forbid, turned into Yaisango: spare energy converted to a weapon for the sake of convenience... ack!
Makes me shiver just thinking about it.
I was too stubborn and I put up too much of a fight.
That was when Theran found me. 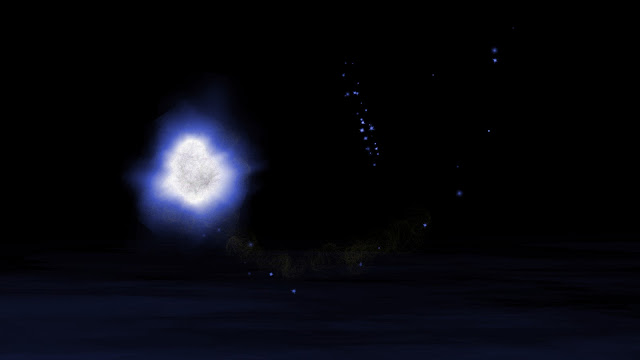 I had a habit of fighting back when things would get too close to me - even if the things weren’t necessarily looking to fight me. I mean, I don’t exactly have much of a coherent memory from before being formed, I just known what Torig and Theran told me.
My energy was a strong, fighting energy. Anytime a spirit would get too close, I would lash out. I was somehow stable enough to recollect all the energy I would strike with, too, so honestly I’d say I was pretty fantastic. 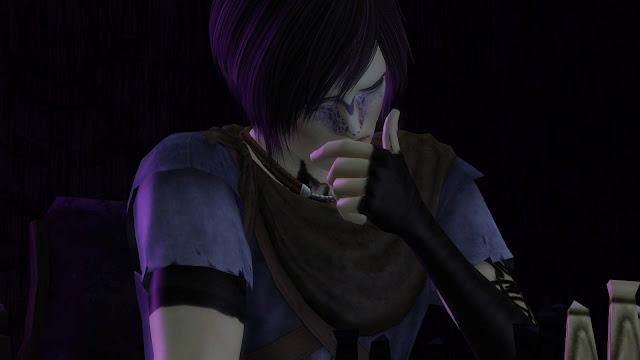 So I was on my own and unformed when I was… well… found. Yes, we’ll call it that…
Theran and Adriel had split - Adriel had gone with the Caldúath on Torig’s orders ahead of them. All of the Nine were out gathering their own units of spirits.
As I said earlier, Theran cannot form spirits on his own, so he had to travel with Torig to select his unit. They had passed by my energy and… I hadn’t realized who I was in the presence of.
You see I may have… hit Theran. 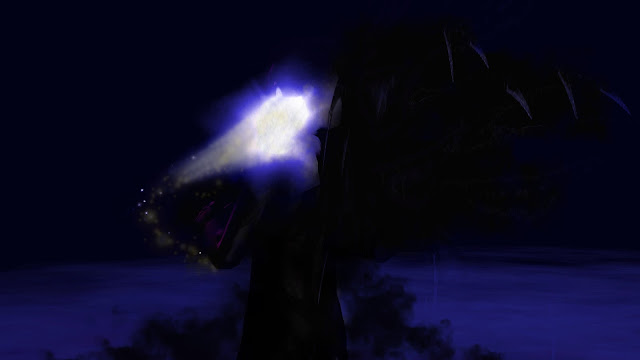 Hard.
Theran didn’t kill me when I hit him, so, that’s certainly saying something. I suppose I should consider myself lucky that Adriel wasn’t with him. If she had taken that hit instead…
I’d be a lot worse than dead, I can tell you that.
So I hit Theran, and no, he didn’t kill me.
He was a bit stunned at first - I don’t think he even really saw me there, but I certainly made myself known. He shook off the hit and before I knew it, I had a body thanks to him. 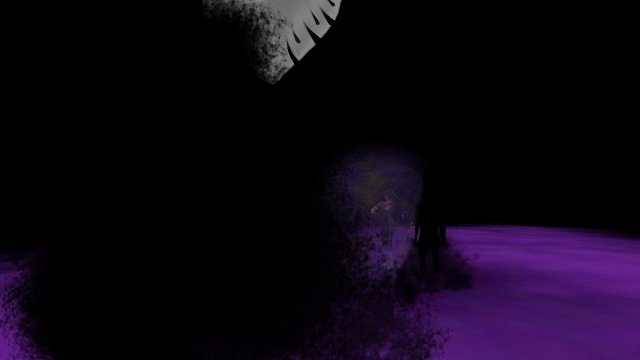 After I was formed we soon figured out that I couldn’t actually sustain any damage. Spirits naturally can heal a little on their own with time, but I lacked that entirely. This was dangerous for someone following Theran into the front lines.
Theran could’ve left me behind and called it a failed attempt at building someone for his army. He didn’t though. He told me to keep up, and if anyone gave me trouble he gave them trouble right back.
Theran was just that way, though. A lot of the Nine formed energy that were more… pliable to their ideals, but not him. 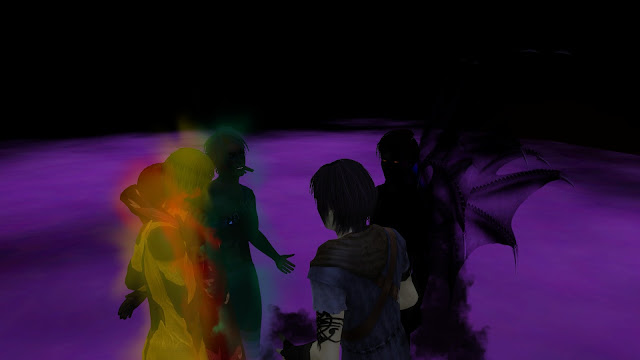 We were a bunch of what you might call misfits, and there were only 5 of us including Theran and myself.
Yes, we were essentially the proud rejects of society. It made us work really well with Theran, given he was essentially a spirit that seemed like an empty. A lot of the other spirits tended to fear him and keep their distance. So he was stuck with the four of us, and the four of us were stuck with him. Even though we gave each other a hard time, we’d jump on anyone else who would. We were few in number, but mighty in strength. 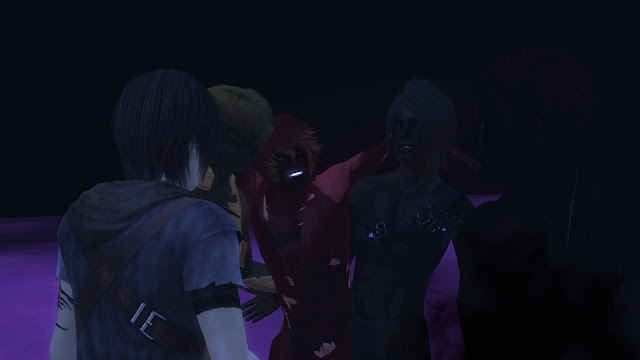 Granted we were far from the smallest bunch. Hecate only had two followers she kept by her, and Adriel only ever kept one: my Myra. 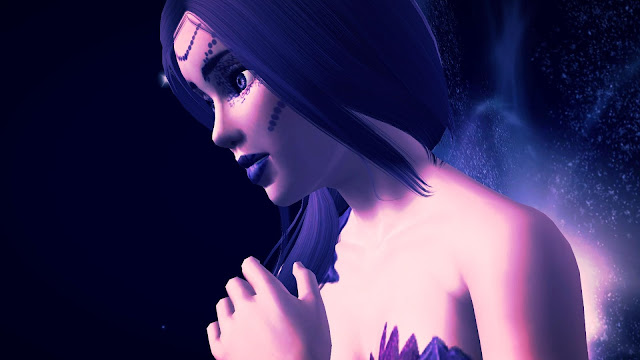 Adriel formed many spirits, but she never asked them to follow her. She never had the heart to. Myra followed her anyways and Adriel was happy for her company. I certainly was too.
I felt a little useless until I met Myra and was able to be whole - able to heal and fight alongside everyone else.
Though, to be completely honest I did give Theran a bit of trouble when I was first formed - you’re not surprised? Yes, yes, alright I did lead into this saying I was a seemingly-troubled spirit. 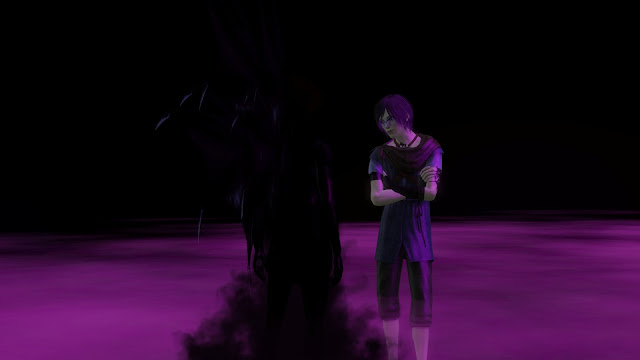 I was not quick to trust anyone, minus Torig, and I honestly hadn’t been sure what to make of Theran. When I first met him he was very difficult to read and he seemed so… indifferent.
You can’t even imagine what a shock it was to meet Adriel later on.
First there was light - then there was too much light and then suddenly Theran was knocked over and being smothered in light. I waited to see Theran destroy her in a similar manner to anything else that had tried to latch onto him - friendly or not - yet he actually showed an emotional state to me for the first time: he was overjoyed. 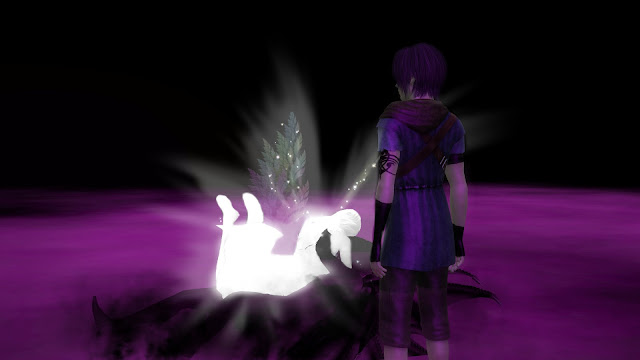 We had been walking for a little bit of time before I had met Adriel, so it was strange to see him finally emoting in some way. Adriel just brought it out of him.
What I wasn’t prepared for was her to smother me too once Theran had been properly smothered. It was just her way. 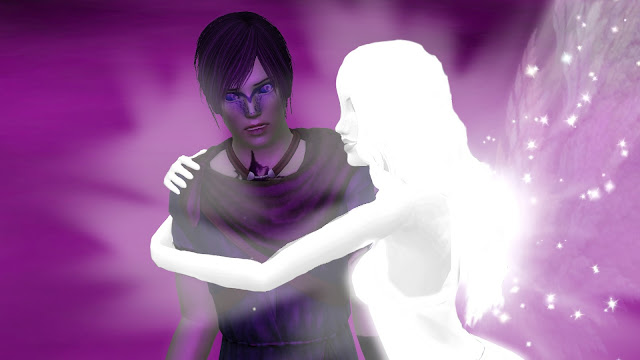 And well, I’d be lying if I said I absolutely hated it.
Surely you must find it nice when someone cares, right?
It’s certainly no different for us.
It was actually Adriel who was determined to find me my perfect other half.
I didn’t actually believe she would do, but one day she did. She came bursting into the area we had set up our ‘camp’ and she was so excited she forgot how to properly communicate. We were cleaning up and getting ready to move out, and she had been so excited she had sped ahead of Myra just to find me. 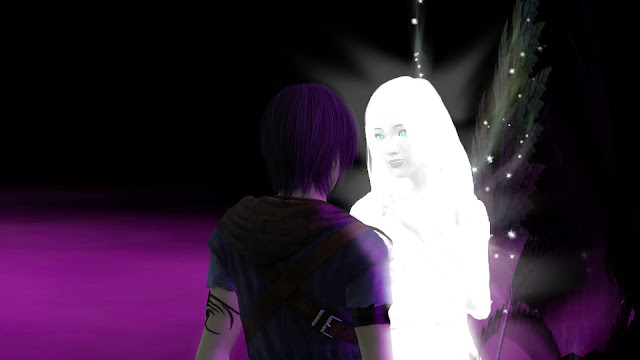 I honestly thought she was joking with me, or something similar. I imagine if I were human I would’ve “rolled my eyes” and carried on. That’s what you do when you show attitude, right? Sounds painful, but you do you.
Adriel had realized she that Myra was still trying to find her way there and took off with as little explanation as she had dropped in with. I’m pretty sure I gave Theran a ‘what’s up with your other half’ look before carrying on.
I remember Theran was as informed as I was, and we continued rounding everyone up.
That was when I saw her. 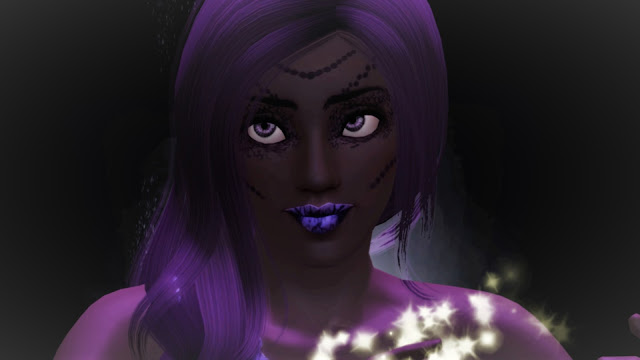 My Myra.
Hold your breaths for a moment - hold it until your lungs near bursting and then hold it a little more still.
Now breathe air.
That was meeting Myra. That is the only way I can describe it, and she… she’s perfect.
I remember that moment specifically because Theran was pulling me along to get me back to work but I was stuck just trying to get a little closer to Myra.
Have I expressed how much I adore Adriel and all she is? I’m sure I have. If not now you know. I’m completely biased in her favor. Completely.
You know why? 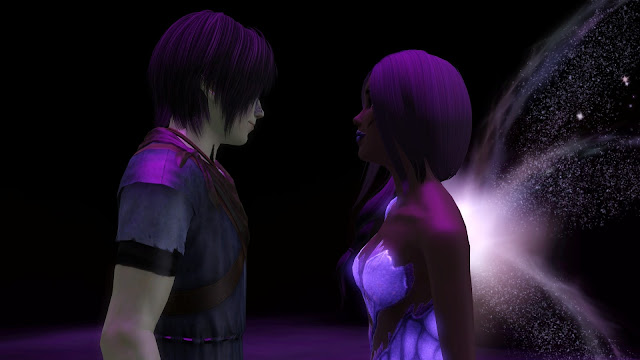 Because in that moment she latched onto Theran and suddenly Theran forgot why he needed me in the first place.
Normally I would’ve laughed and pointed out how distracted he got by his other half but… well… I was rather distracted myself.
A lot of things hadn’t made sense until that moment.
A spirit’s bond with it’s other half is the most pure thing I can ever describe. I suppose it’s something you would never know, as you’ll never truly be incomplete on your own.
I’ll almost feel sorry that you’ll not know this bond. 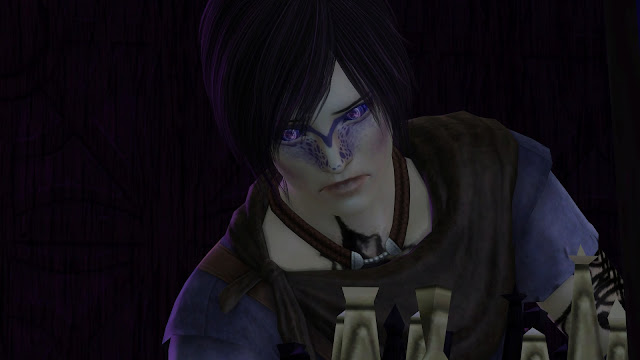 I guess some of you might get close. I know of some specific sects of you that may get close: Vampires have it, and I think Werewolves also have something similar.
You call it a Blood-Link.
I don’t know much about it though, just that the concept is similar.
Once you find your other half, you never wish to be without them. That’s something I’m… painfully aware of.
You feel things with them. You’re connected. They complete you.
You feel their joy, their love, and their passion.
There’s always a catch, though.
You also feel their sadness.
Their fear. 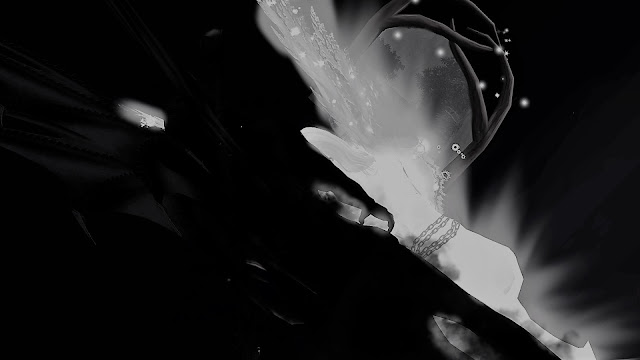 Their pain.
There’s no worse pain than feeling your other half’s suffering.
Ideally you wouldn’t sense it much, as your other half would be happy. They’d be with you. Theran and Adriel, of course, had a unique relationship that way. This explanation may get a little complicated, so I’ll do my best to try to keep it simple and light.
The movement of time works differently in the Spirit Realm. It’s less of a timeline and more like a time-web. The area itself is steady and does not move nor decay, but the things that live amongst these dimensions obviously pass through time. 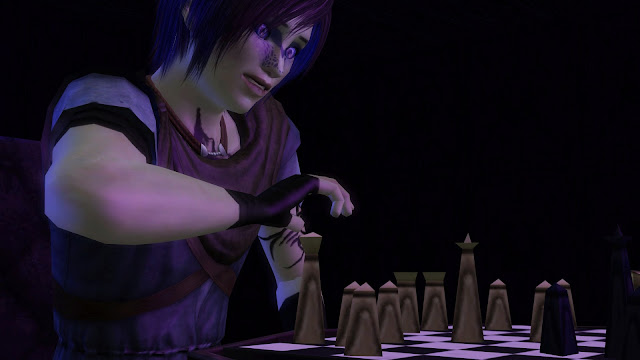 We can visit any period at any time, given we’re skilled enough with the travel and understanding; here’s a hint: I’m not.
The one thing though, is that we cannot sense ourselves in these other times and spaces, nor our other halves. So yes, I could go back to when the battlegrounds of the War of Atalan and observe the fight while being unable to intervene, but my own presence would be impossible to detect, same for Myra’s. I would never know where we were amongst the mass of fights, nor would I be able to sense Myra’s terror that she felt that day. 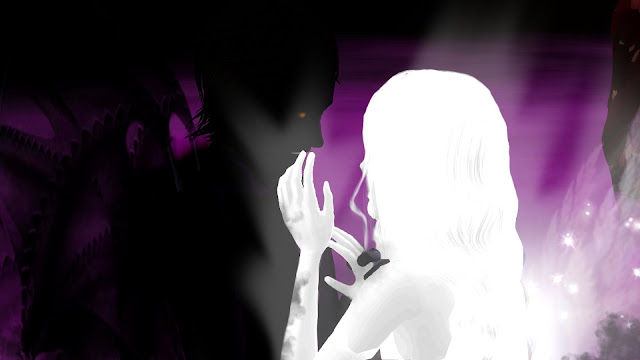 Theran and Adriel’s bond extends even farther. At least, I think it does. There have been several times that we would be traveling together, realm hopping to the nearest place we’re called, and Theran would stop in his tracks. 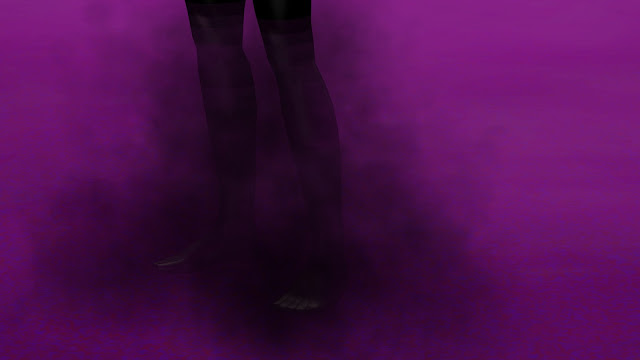 He could sense his Adriel was in distress.
Yet the Adriel that was with us was completely fine - content even.
Theran would rush to her, turn her over, look for signs of distress. 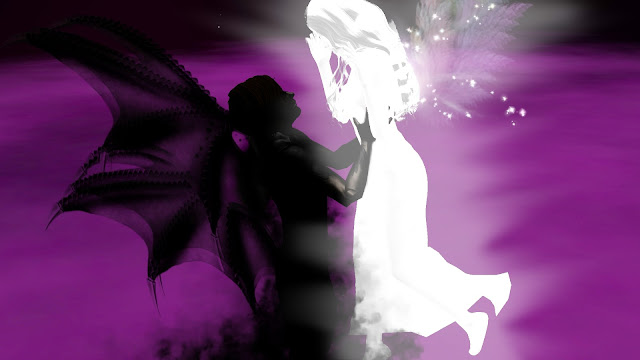 She would grow amused, they would both end up distracted, and Theran would do his best to carry on, ignoring the distress he was picking up from her.
Adriel experienced something similar, granted I don’t recall it happening nearly as often.
She would swarm Theran, panicked. When she would realize he was not in any danger, nor in any need of help her panic would only grow as she would try to find the source. Theran would pick her up and carry her away to soothe her. It was the only way to calm her down.
All of these signs would point to them being able to sense the pain of each other even across the web of time.
Or perhaps maybe they’re sensing from a time that had not yet even happened? 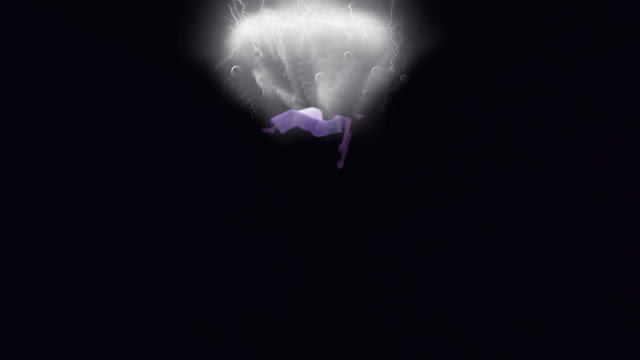 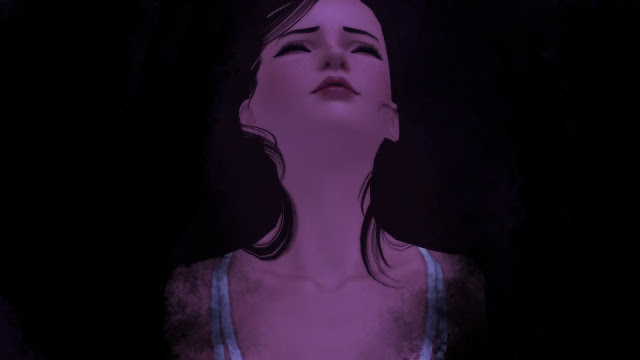 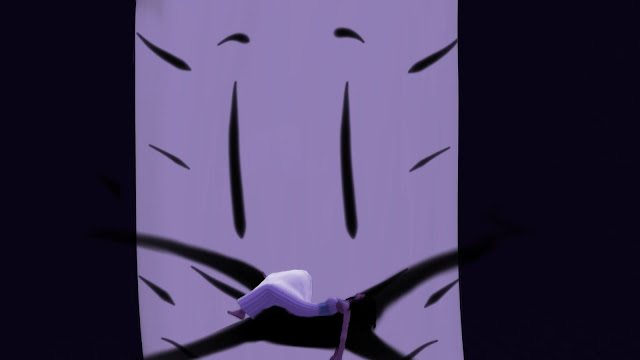 I suppose I’ll never know for sure.