Many stories start the same.
They start at some place during some time with some people.
We've established this already, no? 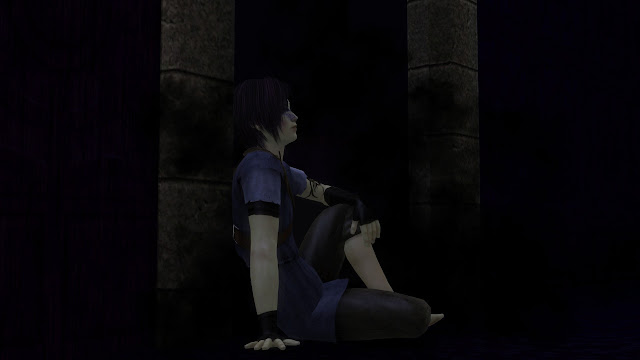 You humans still confuse me.
I’m not one of you, though logic and my verbiage should have already pointed you in that direction by now. No, I'm not a human, though I can look like one if I desire to. That hardly matters anyways - we’re not here to talk about me. You wished to know how the world began? 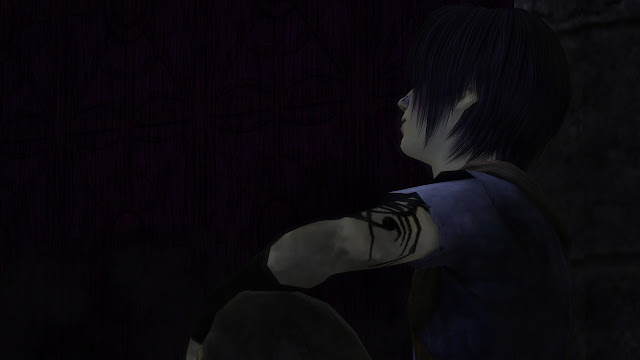 Well then you're in the wrong place, that’s another story entirely. This is not the story of the world beginning, for even I don’t know that tale. 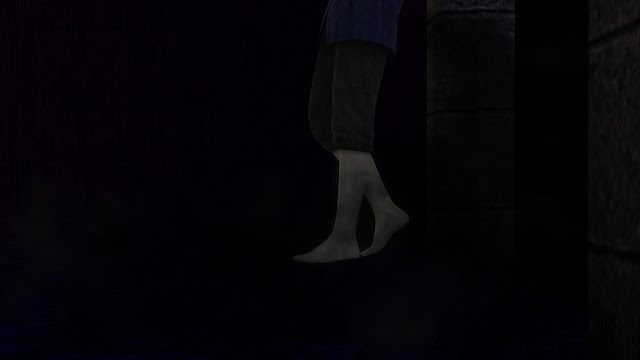 Can I start the story now? No. I suppose I cannot. You don’t even know the concepts behind this story, let alone what this story is about.
In order to understand this story, you need to know more about spirits. Spirits are very different from humans, quite clearly, and the first thing I’m going to tell you will already be hard for you to wrap your human minds around, so brace yourselves for it. 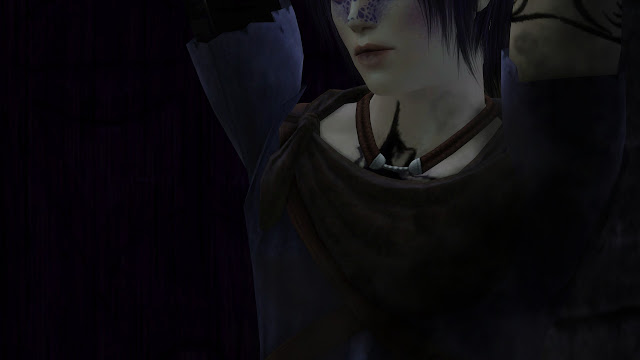 Spirits have human-like qualities, but they do not manifest in the same way.
Was that clear enough? No, of course not! I need examples - always with the examples!
You humans have so many words for things we have nothing for, like what we just established between you and I. Names. Titles. 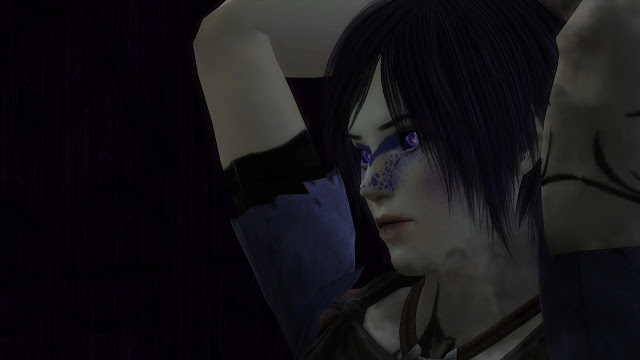 Spirits have no such any of those things. Speaking is not a common thing amongst spirits. Rather boring, really. Why waste the effort when we communicate by other means?
I do not need a name, as if someone wants my attention, they'll have it. They'll sense me. I'll sense them. Though honestly we have very little we need to communicate about. You humans have such idle chatter. It's kind of fun - look at me filling up all this empty space because I cannot possibly sit in the quiet! I'll be one of you in no time at all! 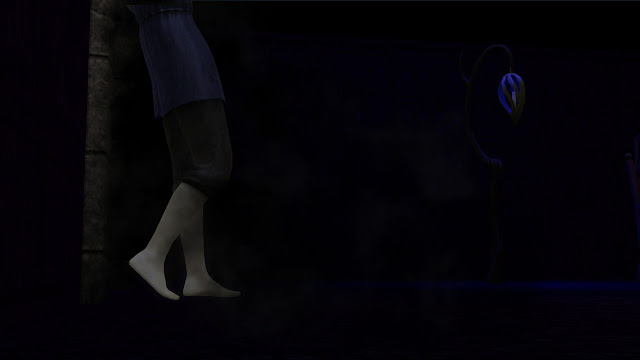 Regardless, this is an example of how we are similar but how we differ. Spirits are made of energy. Everything is made of this energy, I suppose, even you. Ugh.
This has quickly become a science lesson.
Picture this with me now, mortals: 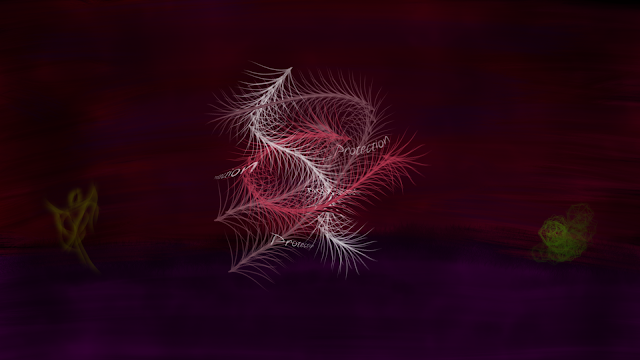 Imagine energy as single fibers, very thin and small. On each fiber there is a single concept. This is not how it works, really, but this explanation will have to do. So you have dozens upon dozens of these fibers and they all say the same word across them. Let's go with... Protection. Right? I hope you’re still with me.
Please, take your finger out of your nose. I’m doing the best I can. 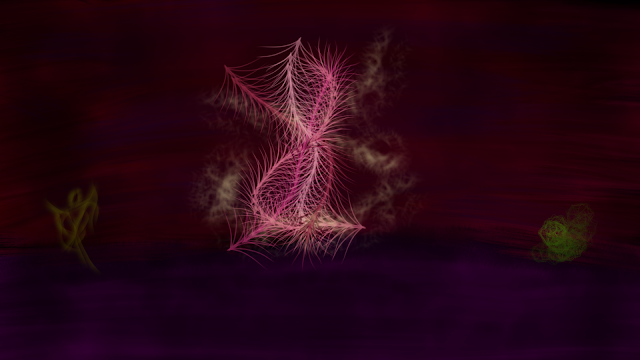 All of these fibers that say Protection on them are drawn together like… oh… what is that concept of yours… magnets. That’s it. Drawn together they try to stay together, but it is difficult. In our world there are many things that would eat such an energy collection. Well, “eat” is such a strange term. “Absorb” is better, but “eat” is likely how you humans would call it.
You all do enjoy your foods. That's what that's called, right? You eat what comes off the ground?
And you all say we're the primitive ones... 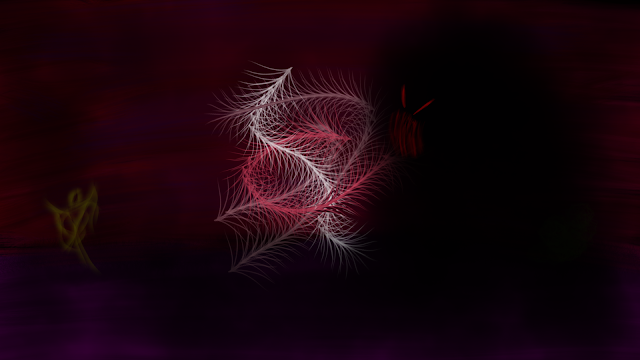 You and your many words. I will never get over how pointless these words are. Though it has been fun thus far exercising this vocabulary. I've already started this story talking about nothing and you're still here, waiting and listening. It's almost amusing!
Yes, yes, I know. On with the example.
Let’s say these strands of protection are lucky and they find a… well… how can I word this for you humans? A builder spirit. Spirits who help create other spirits. Oh! You call them Mothers. 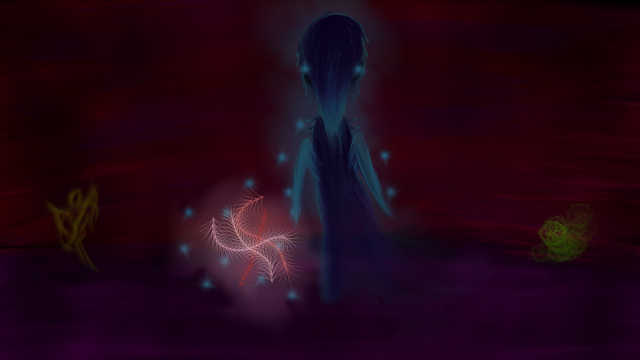 No, no! Not your mother. Oh, have mercy.
That is their fancy name given by you humans and your… scientists? Yes. Those things. People.
They studied the interiors of… oh it hardly matters. These builder spirits are named Mothers. Spirit Spring Mothers. Oh this will confuse you so greatly, because now you’ll assume that they’ll have attachment to their creations and…
We’re moving on. 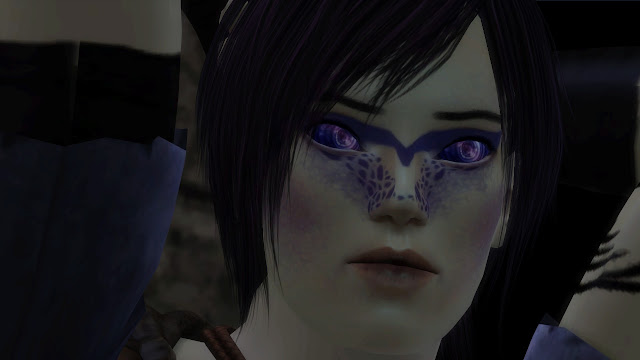 Oh by the will of Torig, what have you gotten yourself into, Adam?
Let’s try this again. Energy is made of fibers, fibers of common themes congregate together, and when enough do it can attract either something that may try to absorb them or something that will build them - give them form. If a Mother finds these strands, they can give it breath.
No, not actual breath. 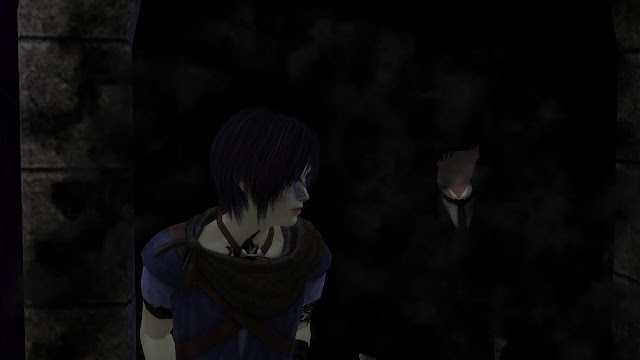 That’s a term I picked up from the greatest builder - the first of our kind. His presence is felt around the world - even you could feel it too, if you only just paid attention for once.
Giving a spirit “breath” gives them a form, essentially. It turns strands of energy into a single, solid spirit rather than several pieces of floating energy that float together, likely to be eaten. 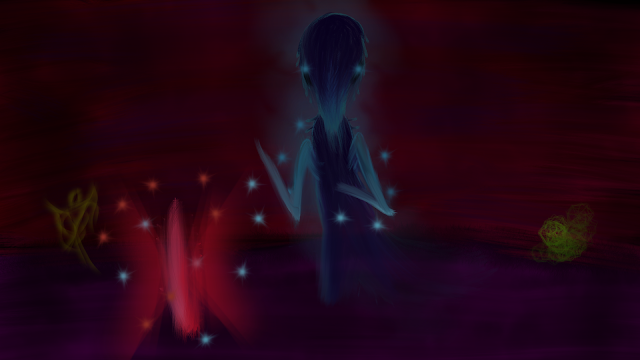 There are so many more layers to this, but now you have the basic concepts. Sort of. Not really. You have the beginning of the basics, so at least that’s a step in the right direction.
Let me get the confetti.
What do you mean you don’t like my attitude? You’re the one who wanted to hear this story! Don’t blame me that your brains are feeble things that have trouble seeing outside of your examples.
I apologize.
I’m just…
I'm not very good at this.
Human things.
Don’t take it personally, I struggle with your concepts as much as you struggle with mine. Perhaps we can meet on equal ground?
I suppose that’s exactly what this story is about. 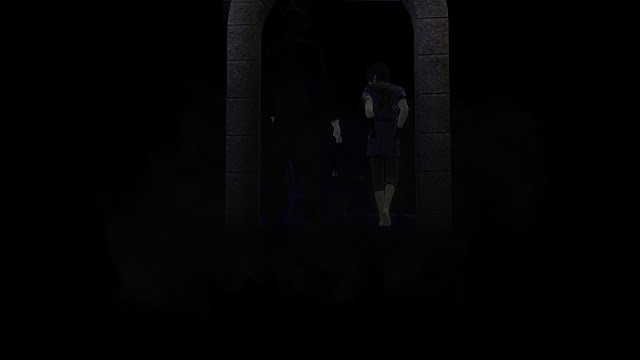 You see this story isn’t about the beginning of the world or the end of it.
No, it’s about a very different aspect of the world entirely.
Something… more personal to me.
Spirits and humans… we’re not so different after all, you see. We feel all the same things you do, we just… have different terms for it. Different… reactions. Happy. Sad. Safety. Fear. Longing.
Love. 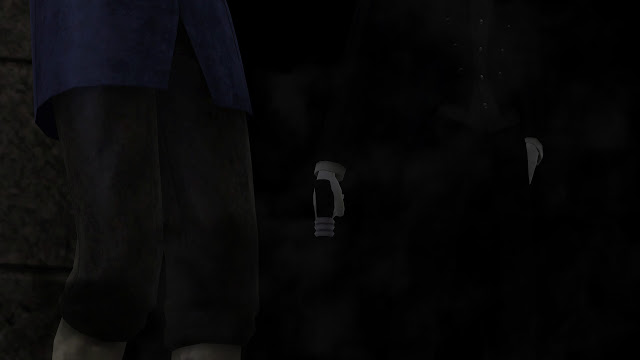 Our love is much the same as yours. Even expressed similarly. We even have a term for it. Yes, you heard me right. A term.
Nyenni.
Granted, our term means many, many things while your terms tend to be more selective. Even… gender selective.
Wife. Husband. Daughter. Son.
To us, it’s all nyenni. 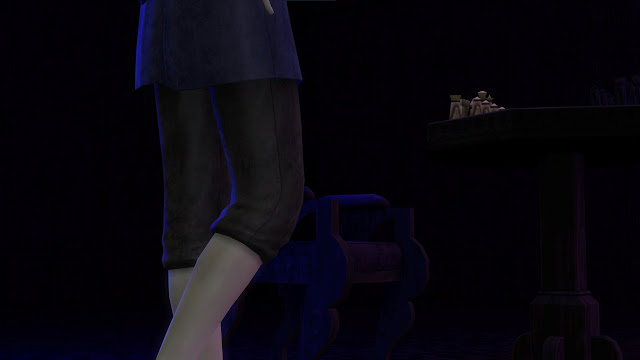 In our language, translating such a word into your tongue would look something like this: “mine, to me.”
Spirits make many bonds in their lives, but there is one that is most important to us. The ones who are nyenni. You see, as spirits are formed they do not have everything. They were merely energy before that all coincidentally came together and was given breath.
Always, at the same time - or, close to it - somewhere in the Spirit Realm, another is usually formed. The perfect other half of the first mentioned spirit. Every spirit has its match. Every spirit has its perfect other half. 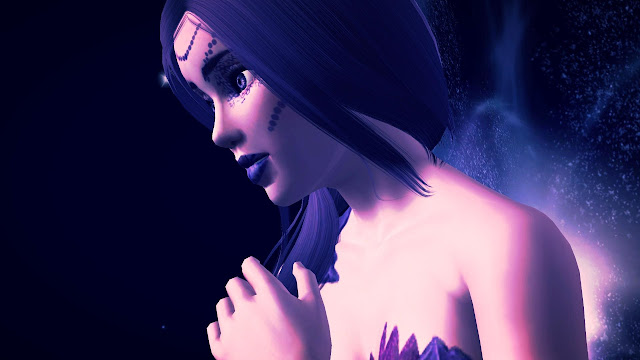 I had one.
I did.
And that’s why I’m here and not there.
This story isn’t about me, though, nor is it about the one that is nyenni, well, nyenni to me. My bond.
I’m sorry, just… give me a moment.
Ok.
I think I am well enough to carry on again.
Without the perfect other half, a spirit will never feel whole. They will never be stable. They can be prone to many things - destructive behavior or incomplete personalities. Toxic.
It is not easy to find our perfect other half, you see, though I’ve probably made it seem like it is. Yet the Spirit Realm is endless. It goes many dimensions. All time and space occurs at once in the many threads that make up this realm. Some of us are very good at navigating these lands… others… are not. 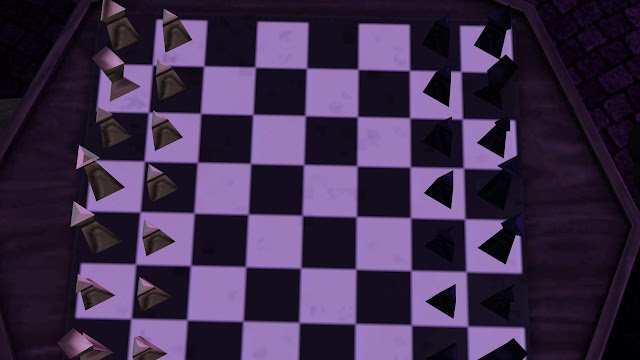 I was not, that’s for sure; so I followed the greatest builder who eventually lead me to my perfect other half.
From here on out, humans, I will assign genders and names to the spirits as best as I can. Our concepts vary greatly from yours, yet I will try to use what is similar as a guide.
The name you humans have for the greatest builder has been lost to time, but I will tell it to you anyways. His name is Torig. 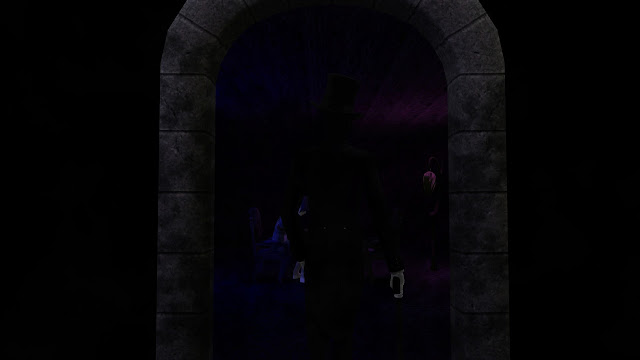 He is the first. He is the only true builder. He is the Essence, I suppose. There was nothing before him, and there would be nothing if he were to disappear. He is the source. He is everything.
I suppose you humans have a term for how the spirits may see him. It is something parental. He is like our father. Everyone’s. He loves all of us. His existence is to combat the empty.
You call them other things - Shades. Energy sucks. They would destroy the world. They would suck the life out of it and it would all wither away.
Torig is in a constant battle with them. 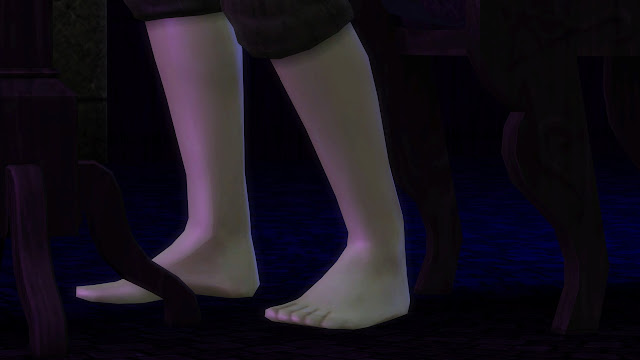 We spirits - his children - are his eyes and ears. His fighters and his menders. His builders and his seekers.
There is one who is more.
I don’t have a better word for it.
No, it’s not one, but two.
It’s… very difficult to explain.
They cannot exist without each other, you see. It’s very easy to group what is two in as one in this scenario. 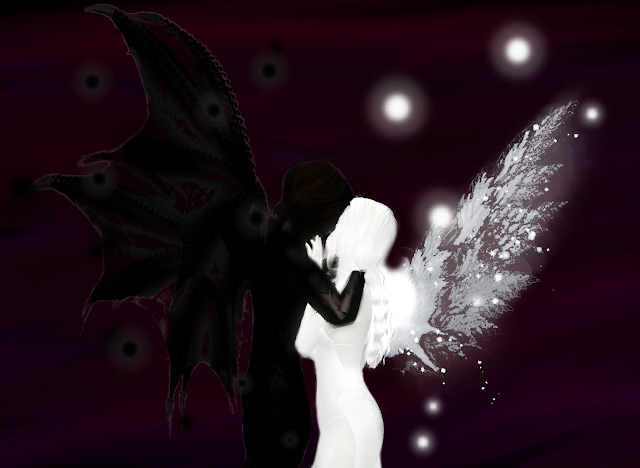 They are very much two, and they are the balance. They are light and dark.
They have many, many, many names, and this…?
This is their story. 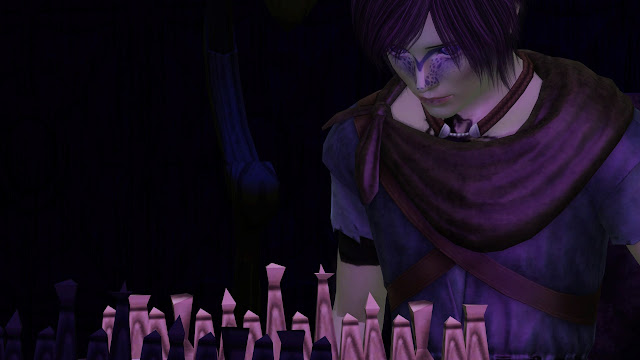